See what readers are saying

about The Good Folks of Lennox Valley! 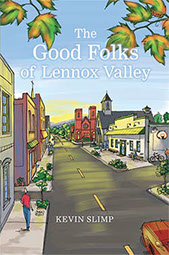 The Good Folks of Lennox Valley

The childhood home of Kevin Slimp was filled
with characters of all kinds. From Raymond
Cooper, owner of the town's only radio station,
to Sarah Hyden-Smith, the first female
preacher, there never seemed to be a dull
moment in "The Valley."

Things get even more interesting when Raymond Cooper decides to
utilize his radio fame to propel him into the most powerful seat in
town . . . mayor. Fortunately for the good folks of The Valley, Iris Long,
editor of The Hometown News is keeping a close eye on Cooper.

The story of The Good Folks of Lennox Valley has been followed by millions of readers since 2015. Enjoy the first book from this beloved weekly serial found in hundreds of newspapers across America.

Kevin Slimp's work can be found in journals, magazines and newspapers throughout the world. His columns related to journalism are read by publishers, editors and journalists on four continents.

Kevin's fictional syndicated column, The Good Folks of Lennox Valley is carried by 200 newspapers across America each week.

He's also kind of a big deal to technology professionals since developing the method used in most printing today back in the 1990s.

See what readers are saying about The Good Folks of Lennox Valley!